British Airways is a full service global airline and Hamish is responsible for defining the brand and communicating it consistently around the world by leading the brand strategy and delivery. 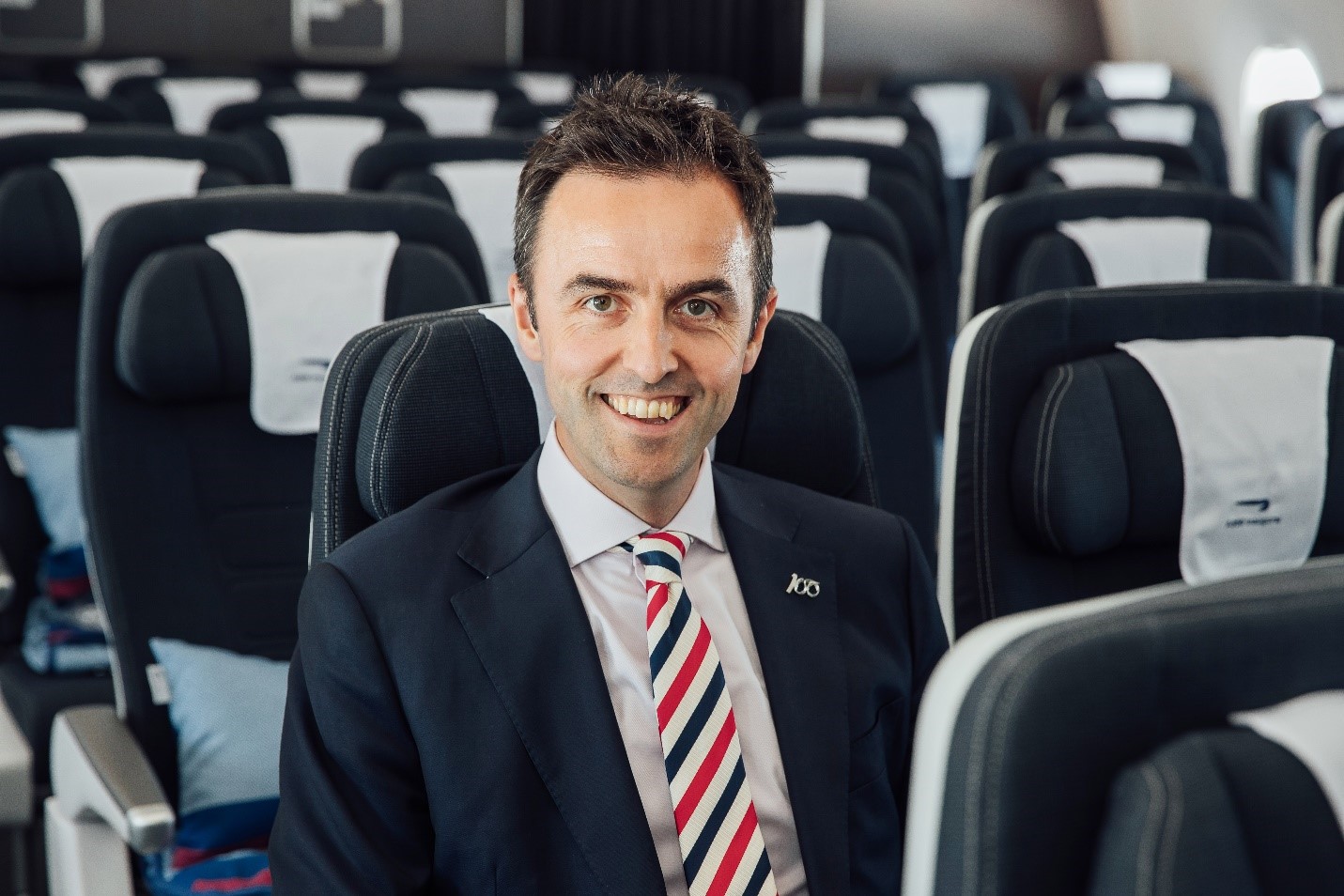 HM: A range of activities took place to mark British Airways’ centenary this year, including BA 2119; a programme exploring the future of fuels, the customer experience of the future and the aviation careers in the next 100 years.

MZ: British Airways recently celebrated its 100th anniversary – a landmark in aviation! Congratulations on your centenary. How did you celebrate?

Over the course of the year the company also marked the centenary by releasing several centenary-edition on-board products, such as a travel-sized marmite, a transatlantic IPA ‘Speedbird 100’ with Scottish craft brewery BrewDog and centenary edition amenity kits. On top of this, the airline has also painted 4 aircraft in retro-liveries (BOAC, BEA, Negus and Landor), with the BOAC liveried aircraft flying with the Red Arrows in this year’s Royal International Air Tattoo.

The airline delivered ‘100 Acts of Kindness’ for customers as part of their ‘BA Magic 100’ campaign. This included once-in-a-lifetime trips and reunions, upgrades, surprise proposals and money-can’t-buy experiences.

MZ: Flying is an exciting experience so how do you work hard to ensure British Airways customers enjoy it?

HM: British Airways is investing £6.5 billion for its customers over five years, taking delivery of 73 new aircraft including A350 and 787s, refurbishing its long-haul fleet with new cabins, introducing new, redesigned lounges, new dining across all cabins, new bedding and amenity kits, best quality onboard WiFi to every aircraft and access to power at every aircraft seat. The airline recently introduced its Club Suite, a new business class seat with direct aisle access on its A350 aircraft, which will be rolled out across the British Airways’ long-haul fleet over the next few years.

BA is investing in technology to improve customers’ journeys, with 70+ self-service bag drops, 200+ self-service check-in kiosks and biometric and self-boarding gates. British Airways is also the first and only airline to use the eco-friendly, emissions-free Mototok tugs.

MZ: British Airways is a strong business with a strong brand but how do you deliver for your customers in an ever-changing world?

British Airways has also been researching the Future of Flying. BA 2119: Flight of the Future, a first-of-its-kind exhibition looking ahead to the next 100 years of flying, was open throughout August 2019 at the Saatchi gallery in collaboration with the Royal College of Art. The research seeks to push the boundaries of imagination and explore how future generations will circumnavigate the globe in a world of advanced jet propulsion, hyper personalisation, automation, AI, modular transport, sustainability, health and entertainment. 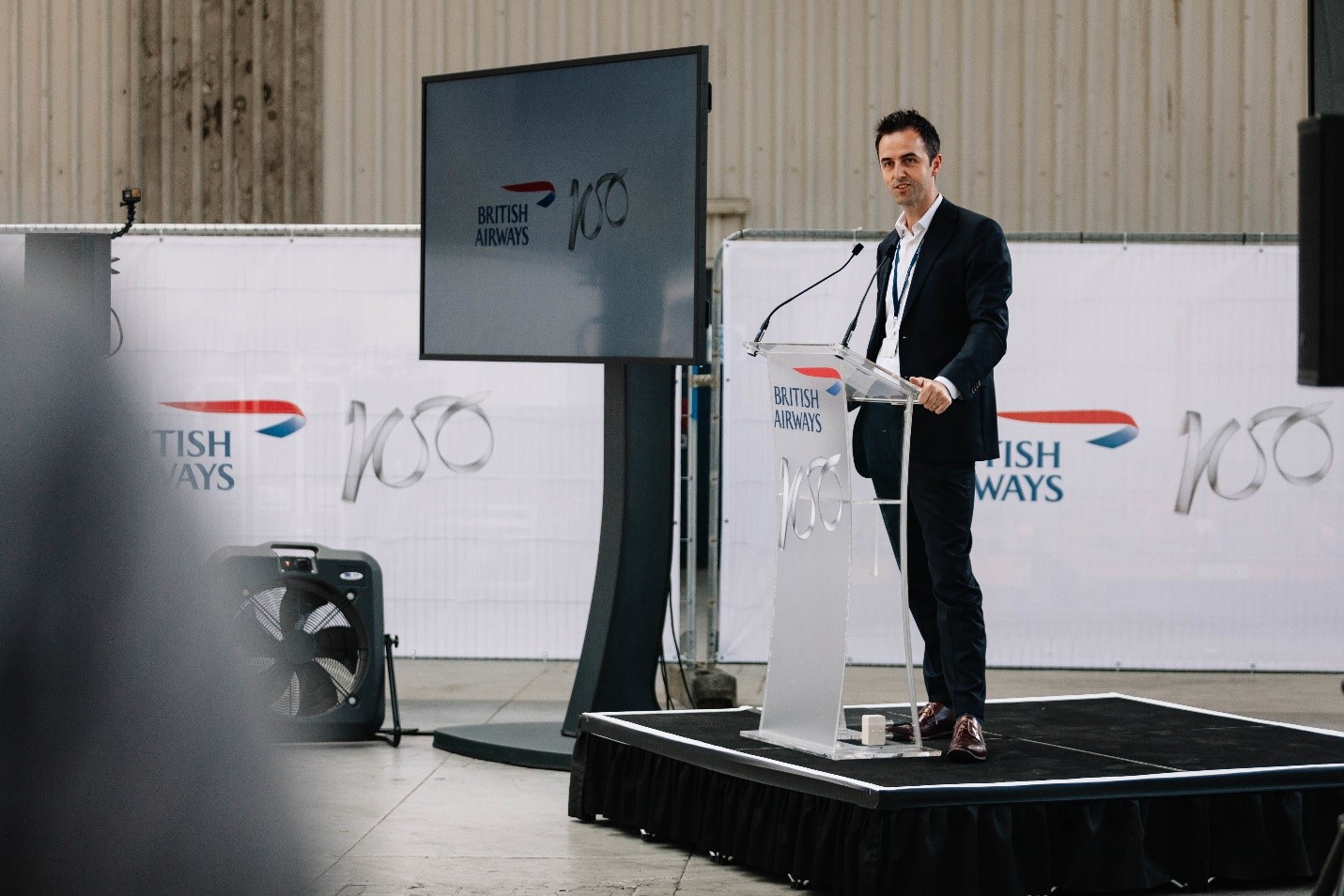 MZ: Climate change is possibly the most urgent environmental challenge facing the aviation industry. How is British Airways determined to find solutions to address carbon emissions?

British Airways is the first airline in Europe to invest in building a plant, with renewable fuels company Velocys, which converts organic household waste into renewable jet fuel to power its fleet. British Airways has also invested in 18 new aircraft which are up to 20 per cent more fuel efficient and with Mototok, their new automated pushback devices, airside emissions and fuel consumption have been reduced.

British Airways has further been researching sustainable fuels, launching the BA 2119: Future of Fuels challenge in collaboration with Cranfield University, which called on British universities to develop a new or different pathway to achieve global leadership in the development of sustainable aviation fuels.

MZ: The Airbus A350 – the latest addition to your fleet family – sounds like a game-changer. What is so good about it?

As well as a new 56-seat Club World cabin, the three-cabin A350 will feature the latest World Traveller Plus cabin (56 seats) with new furnishings including a plush new pillow and warm quilt, new amenity kits and an enhanced service and an improved dining experience.

The A350 aircraft itself will also promote a feeling of well-being, space and calm due to its reduced noise levels, high ceilings and ambient lighting which is intended to compliment the time of day and outside light. Customers will leave their flight feeling rested thanks to higher levels of humidity and refreshed air as the cabin pressure is equivalent to an altitude of just 6,000 feet. There are also environmental benefits to flying on the state-of the-art A350 as 25 per cent lower fuel burn significantly reduces CO2 emissions.

MZ: The premium leisure, as a sector, has been rapidly increasing in size. How is British Airways increasing its offering for this segment?

HM: British Airways is set to deliver significant changes to the onboard product and service in its First, Club, and World Traveller Plus cabins as part of its £6.5bn investment for customers. This includes new amenity kits and improvements to the on-board dining experience.

New amenity kits using material from recycled plastic bottles are also now available in the airline’s World Traveller Plus cabin. More comfort will also be delivered through a stylish new quilt and cushion with the herringbone design that is synonymous with the pattern that runs throughout the airline’s First cabin.

MZ: Notably British Airways has grown at Gatwick Airport – including its long-haul services – is this change coming to Heathrow too?

HM: We are always reviewing our route network adding new routes from Heathrow, Gatwick and London City. We are currently operating our largest route network in more than a decade with 15 new routes launched in 2019 (please also see answer to What new geographies you are targeting in 2019?).

So far BA has announced 6 new routes launching from London Heathrow in 2020, to destinations in Greece, Italy, Kosovo, Montenegro, Turkey and Oregon.

MZ: How do you feel about British Airways’ punctuality? Does it need to improve?

HM: British Airways has the best punctuality of the five major short-haul airlines from London. We are always investing in new technology in order to improve customer experience and our operations, for example, with our improved biometric technology and the 70+ self-service bag drops and 200+ self-service check-in kiosks.

The company’s investment in fully-electric, remote-controlled Mototok devices, which have been used to swiftly manoeuvre the airline’s 140-strong short-haul fleet out to the runway for take-off, has also reduced pushback delays by 70%.

MZ: What new geographies you are targeting in 2020?

HM: Operating one of the most extensive international scheduled airline route networks together with its joint business agreement, codeshare and franchise partners, British Airways flies to more than 200 destinations in almost 80 countries on a fleet of around 300 aircraft.

MZ: Thank you. It’s been a pleasure learning from the British Airways brand. Lastly, what take-home message do you have for FSB’s students?

HM: British Airways has a number of apprenticeships, placements and work experience schemes. We’re looking for enthusiastic, aviation-loving students who are highly motivated.

British Airways is a world-class airline with a proud history. But our sector is changing fast. Data and new technologies make serving our 45 million customers both simpler and more complicated. Regulation and sustainability add to the complexity. Customer needs and expectations are ever-evolving. And in this shifting landscape, we need to tackle many challenges that are industry-wide or unique to us.

So we’re seeking agile-minded, forward-thinking graduates and undergraduates. Dynamic high-performers who can act fast, think smart, make us lean and reap the rewards of teamwork. People who will stand up to whatever’s thrown at them. And then do what it takes to guarantee success for the business, our customers and each other.

FSB students, join the debate and comment below. What are your views on the British Airways interview?

Please email kunal.mehta@fairfield.ac for any questions or comments or to find out more about the work of British Airways.