The Chancellor of the Exchequer, Rishi Sunak, tells FSB students: We have taken decisive action to protect our economy

Rishi Sunak, Britain’s most popular politician and Chancellor in 15 years – appointed barely a month before the country went into swift lockdown – outlines his £160bn protection plan amid the economy taking its largest plunge. The ‘giveaway’ Chancellor faces a historic uphill uncertainty that rests the country’s economic future on his shoulders – something that no Chancellor has ever experienced or would ever want to.

‘We put in place one of the largest and most comprehensive economic responses in the world,’ said Sunak to FSB, strengthening his status as the government’s point-of-light philanthropist. ‘Our £160 billion plan protects people’s jobs, incomes and businesses.’

To appreciate the upshot of the aforesaid, think of David and Goliath. Sunak is the slingshot. As he leads with his endorsed extensive economic plan, the Treasury faces a predicament on how to restart the economy while ensuring finances are sustainable.

‘We have taken decisive action to protect our economy. But people are anxious about losing their jobs, about unemployment rising,’ added Sunak on buoying the economy back from the brink. ‘We’re not just going to accept this. People need to know we will do all we can to give everyone the opportunity of good and secure work.’

Resolutely, Sunak placed the UK economy into deep-freeze and offered a short-term fix furlough scheme that paid 80 per cent of workers’ wages for staying at home – to keep employees, customers and consumers at home during the developing coronavirus emergency.

Aware that the longer people remain on furlough, the more likely their skills could fade, Sunak added: ‘Furlough has been a lifeline for millions, supporting people and businesses to protect jobs. But it cannot and should not go on forever. I know that when furlough ends it will be a difficult moment. I’m also sure that if I say the scheme must end in October, critics will say it should end in November. If I say it should end in November, critics will just say December.’

The Chancellor’s duty-driven decision to get as many people as possible from furlough back to their jobs is widely acclaimed. Yet, the central truth is that no one knows how deep the recession – or how severe the levels of unemployment – are going to be, as no one can be sure of the subsequent phases of the pandemic.

Throughout the course of the pandemic, Sunak has surfaced as the odds-on favourite to be next in Number 10. Piously navigating through the dells of economic collapse while allotting billions in rescue packages and kick-starter handouts – and even meal deals, Sunak has managed to inexplicably cultivate a style signature that humanises a modern leader. 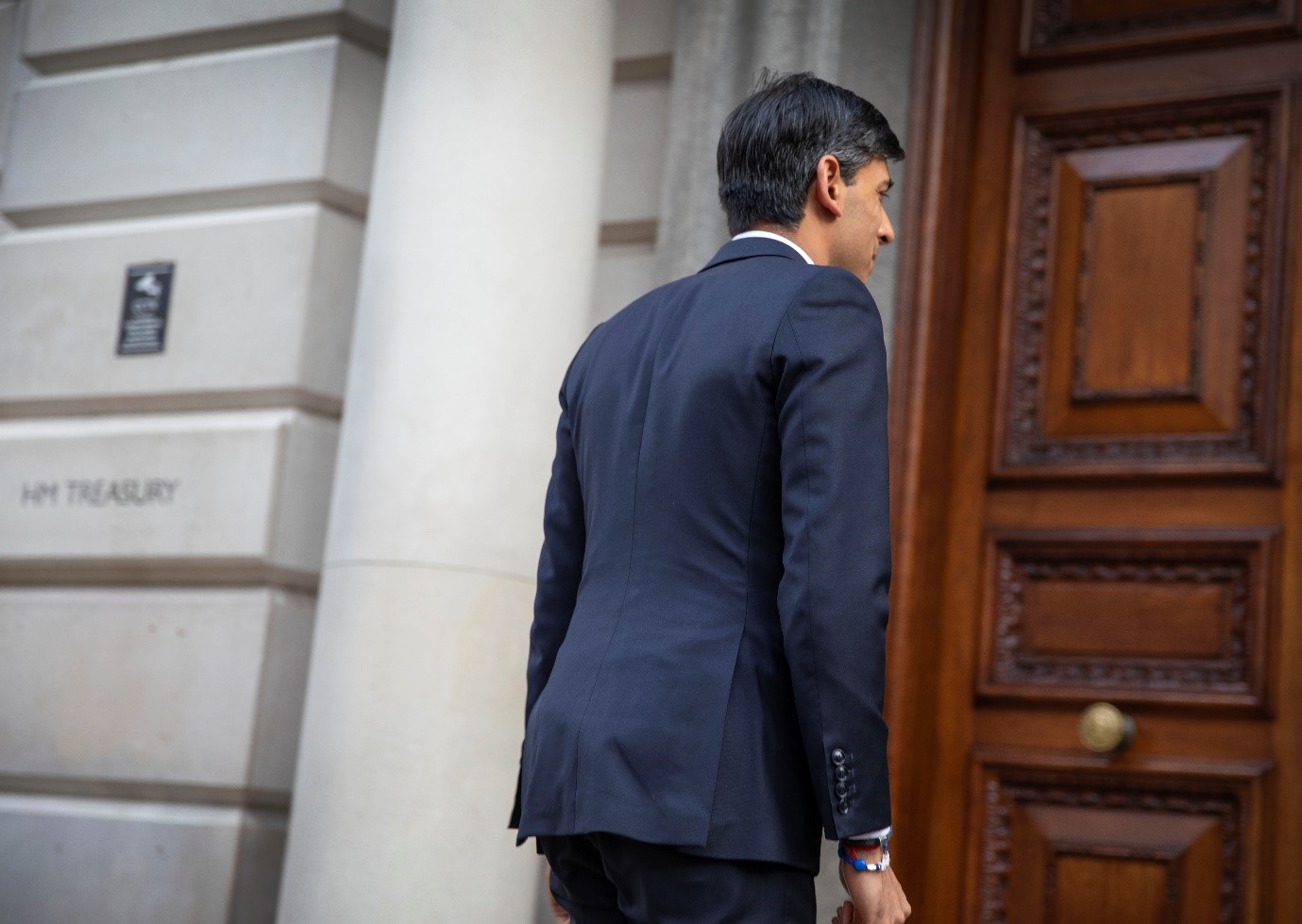 No turning back. (Image used with permission, Crown Copyright)

‘Despite the extraordinary support we’ve already provided, we face profound economic challenges,’ outlined Sunak. ‘World economic activity has slowed, with the IMF expecting the deepest global recession since records began, household consumption – the biggest component of our economy – has fallen steeply, businesses have stopped trading and stopped hiring – and taken together, in just two months our economy contracted by 25% – the same amount it grew in the previous eighteen years.’

But, in one of the toughest jobs in government, Sunak warns that although hardship lies ahead, no-one will be left ‘without hope’ by his emergency measures to combat the economic impact of coronavirus: ‘Our plan has a clear goal: to protect, support and create jobs. It will give businesses the confidence to retain and hire. To create jobs in every part of our country. To give young people a better start. To give people everywhere the opportunity of a fresh start.’

Purportedly, Sunak’s uphill battle to drag the UK out of the worst possible recession it has seen in three centuries will be amid a myriad of difficulties and uncertainties. With a huge responsibility, and with every decision having profound effects on entire economic sectors, and future generations, everything is resting on the Chancellor’s vast plan for jobs.

‘The furlough system has helped a lot of people ensure that the effects of the impending recession are minimalised,’ retorted Thea Dawkins, an FSB Student who also works as an NHS Healthcare Assistant. ‘The lockdown has hit us all hard, but we seem to be in the right hands. I am particularly pleased with the discounted meal deal that the Chancellor has introduced as this will incentivise many of us to help promptly revive the hospitality industry.’

‘Preparedness is key but during this time of great national uncertainty, we can be sure of one thing: more uncertainty,’ added FSB’s Deputy CEO, Mr Mohammed Zaidi. ‘Sunak understands the moment, yet his plans are met with some censure from those who believe that the UK should not add to its national debt. The country must hope the Government has accurately adjusted the balance between saving the economy and defeating the pandemic.’

Dhan Chooramun, FSB’s Associate Dean, added: ‘COVID-19’s impact on the world economy is utterly devastating. We have a straightforward Chancellor of the Exchequer and his economic revival plans have helped a huge section of the UK labour market. History will look back and commend the UK’s economic response to the pandemic.’

The Chancellor aims to be remembered for ‘doing the right thing’. (Image used with permission, Crown Copyright)

Overall, the Chancellor will not be defined by this crisis, but by his response to it. Thus, Sunak needs to sustain his sturdy suppleness – and how he handles this economic challenge could even determine whether Britain’s government can change its economy for the better

Sunak’s priority, therefore, is to avoid long-term damage from the crisis and a decline in the UK economy’s growth. But as things stand, the measures have been vastly welcomed by the public, and the Chancellor’s prestigious public popularity will be the envy across Westminster – and, hopefully, throughout the economic terrain.

Please email kunal.mehta@fairfield.ac for any questions or comments about the article.